After the fire: How drones and lasers can keep forests healthy 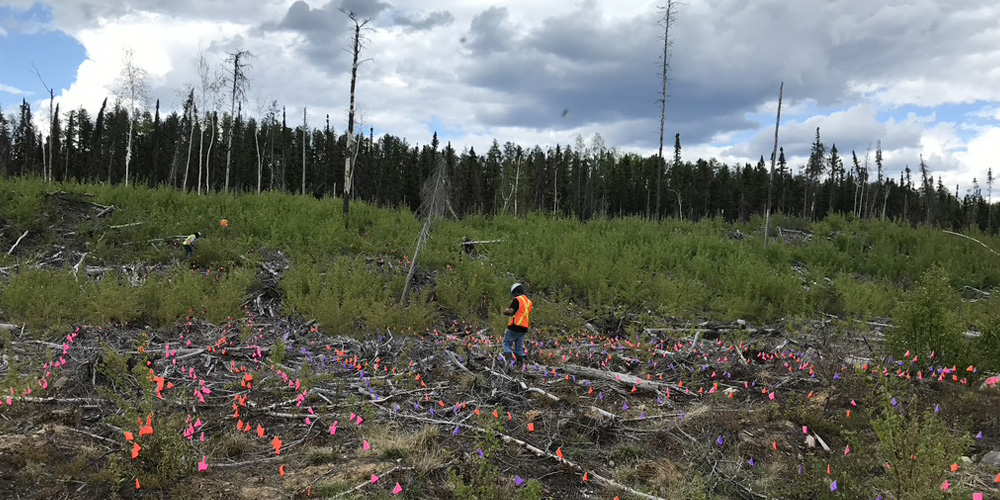 Climate change is making wildfires are becoming more frequent and more severe. Researchers are looking to the skies for ways to replant trees and help forests bounce back quicker.

On five acres of land near Kenora in northeast Ontario, researchers are trying to bring a forest decimated by fire back to life using a mix of Indigenous insights and new technology.

Flash Forest, a Toronto-based startup and one of 10 MaRS Climate Champions, is working with Miisun, the First Nations group that manages the Kenora and Whiskey Jack Forests, to replant the previously rich stands of white spruce from the air. Over the course of a single day this spring, drones carpet-bombed the area with pods containing a mix of seeds and micronutrients selected to encourage regrowth of a dense, ecologically diverse forest. Later this month, researchers are returning to the site to assess how many of the seeds germinated and whether the forest has taken the first step on the decades-long road to recovery.

The plot of land that Flash Forest and Miisun are working on was among the more than 770,000 hectares of forest to go up in flames in Ontario last year, the most ever recorded. Wildfires are a natural part of forest ecosystems — more than 8,000 of them occur each year in this country. But climate change is making them more frequent and more severe.

Amy Cardinal Christianson, a scientist with the Canadian Forest Service, distinguishes between the relatively small “good” fires that keep forests healthy by stimulating new growth and the enormous blazes that have been seen recently, especially in British Columbia. “These massive fire events, they burn so hot and intensely that they obliterate everything in their path and almost turn certain areas into deserts,” she says.

According to Faisal Moola, a professor at the University of Guelph, there is evidence that in the past few years Canada’s forests have become net contributors of carbon dioxide in part because of increased wildfire activity. There are now fears that we may be at risk of setting off a carbon bomb, creating a loop in which carbon dioxide released by fires and decomposition of dead trees creates hotter temperatures that encourage more fires.

“Our emissions may in fact be a lot worse than we actually account for and we manage for, and that’s really, really frightening,” Moola says. “And it will be a lot worse if we ignore the potential of planting new forests.”

Although Canada’s boreal forests have evolved to be resistant to fire, they need help to recover in the face of such an onslaught. But this country’s boreal zone stretches from Yukon to Newfoundland and Labrador, an enormous area for forestry workers to cover.

Listen to this episode of the new MaRS podcast Solve for X, where we explore how drones and lasers can keep forests healthy.

Angelique Ahlström, Flash Forest’s chief strategy officer, says that drones can be deployed to places where it would be impractical to send humans to plant saplings. “We’re going to increasingly need to employ drones in unsafe areas such as wildfire-affected areas and areas inaccessible to human planters, like remote or high terrain,” she says.

To help ensure the seeds have the best chance of germinating, Flash Forest has an in-house team of botanists who are constantly refining the combinations of seeds, nutrients, minerals and microorganisms in its pods. In each location, the company selects a mix of seeds of species that are local and well adapted to a particular environment, as well as ones such as birch and larch that are fire-resistant and others that are likely to adapt well to climate change. In Canada, the task of optimizing drone planting is made more difficult by our lack of detailed knowledge about forest ecosystems — there’s a lot still we need to learn.

“We have a very coarse understanding of the different types of habitats that exist in Canada,” says Moola. He is working with the U.S. Forestry Service to use drones to conduct biodiversity surveys from the sky, using cameras that can identify organisms as small as lichens. Other groups are using satellite imagery and LIDAR (an imaging technique that uses lasers to measure distances) to create a more detailed picture of forests.

The goal of all this activity is to create complexity. Rich, biodiverse ecosystems are much better at trapping carbon than monocultures — and they’re more resistant to pathogens and fire, too. But while drones could enable us to kick-start regeneration of these kinds of ecosystems after wildfires, Moola worries that the technology could also be used to turbocharge some intensive-forestry practices that are damaging.

“The large multinational logging companies … they’re also looking at drone technology because they’ve realized they can use it to re-establish plantations much cheaper,” he says.

He cautions that the way we manage forests has to change alongside new technologies to make them more resilient. If not, he says, “the danger is that this just furthers the same industrial model of forestry that has done so much harm to the planet and Indigenous peoples that depend on these forests.”

Find out more about the fate of our forests in the second episode of MaRS new podcast, Solve for X: Innovations to Save the Planet. Host Manjula Selvarajah talks to a NASA scientist studying woodlands from space and meets a researcher using automation in forestation efforts in Thailand.