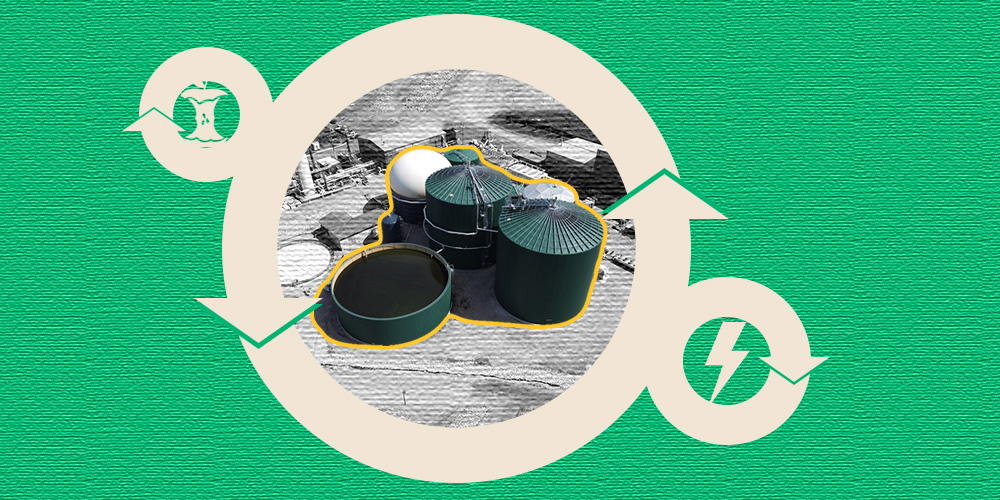 London company StormFisher is making carbon-neutral fuel with materials once destined for the dump.

Over the last month, consumers have glumly watched as a global energy system crisis played out everywhere. The price of coal, oil and gasoline all jumped; at the beginning of November, the average price at the pump was a painful $1.45 a litre. The cost of natural gas, in particular, has skyrocketed — in North America, prices have reached heights not seen in years, driven by exceptional demand; low supply in Europe has meant a fivefold increase in prices there. The knock-on effects of this are extensive: higher food prices, elevated manufacturing costs. For many countries, it’s shaping up to be a very long winter.

What better time, then, to seriously scale up other — more sustainable and renewable — forms of natural gas?

As a fossil fuel, combusted conventional natural gas emits a lot of greenhouse gas — less carbon dioxide (CO2) than coal and oil but nonetheless a significant amount of methane, a less-enduring but very potent greenhouse gas. But natural gas can be made in ways that also prevent excess greenhouse gases from escaping into the atmosphere, reduce our reliance on fossil natural gas and reduce emissions overall. Many independent sources, including the B.C. government, consider renewable natural gas (RNG) a carbon-neutral fuel source as its combustion doesn’t add to the natural carbon cycle.

The London, Ont.–based company StormFisher has been in the RNG business since 2006. It is a pioneer in anaerobic digestion, the process whereby organic waste (everything from green-bin scraps to livestock manure and wastewater) is transformed into electricity and natural gas while also capturing the methane that’s released when that waste decays. In this process, bacteria break down the waste and produce methane-filled biogas, which is refined and turned into RNG that’s indistinguishable from conventional, fossil natural gas. StormFisher obtains waste from such clients as Labatt and Maple Leaf Foods; and then sells its RNG through utilities including Enbridge and FortisBC.

RNG has its limitations, however. For one, there are only so many organics available (turning wood waste into biogas that’s interchangeable with fossil natural gas, for example, is still not done at a commercial level). Currently, Canada only has 61 anaerobic digestion plants. (In Europe, unsurprisingly, there are many more; Germany alone has 9,000 plants.) RNG is certainly much better for the climate than fossil natural gas, and we likely won’t be able to achieve net-zero goals without it. However, it is also, for the moment anyway, still more expensive than conventional natural gas in North America.

But StormFisher’s owner and vice president of development and operations, Brandon Moffatt, has long been committed to sustainability. He grew up on a beef farm in southwestern Ontario, where, watching manure morph into fertilizer, he got his first lesson in the circular economy. The farm also taught him a deep respect for the environment, he says, something that he’s carried into his work at StormFisher. “For me, it’s making sure you try and make the world a better place than when you came into it,” Moffatt says. Moffatt visited Europe five years ago and discovered yet another way to do that by producing RNG through a whole new method. In northern Germany, an Audi factory was using renewably generated electricity — wind and solar — to split water into hydrogen and oxygen molecules. It then took CO2 from a nearby waste biogas plant and combined it with the hydrogen in a chemical reactor to create synthetic methane. Once refined, that resulting methane was no different than the methane that comprises fossil natural gas or the RNG that Moffatt makes in his London biogas facility.

The technology made a lot of sense, so when Moffatt got back to Canada, he quickly set about figuring out how to make it work here. He calculated that he could make seven times more RNG from a so-called power-to-gas plant than from his London operation, which is one of the largest in North America. By converting off-peak wind and solar energy, neither of which generate emissions, the RNG would essentially be carbon-neutral. Using power-to-gas, Moffatt says, “I can make renewable natural gas at a much larger scale to help accelerate the decarbonization that we need to take.”

The CO2 that Moffatt would use to create the RNG can come from a variety of industrial sources — ethanol plants, ammonia plants, steel mills — all of which produce enormous, and enormously destructive, amounts of the gas.

For David Simakov, a chemical engineering professor at the University of Waterloo, this is a double-barrelled benefit of power-to-gas. “Cement, steel, chemical — they’re all producing a lot of CO2 and we’re not stopping any of these industries anytime soon,” he says, adding that using available electricity from renewable sources and CO2 from these large-scale industrial sources, “we can gradually replace fossil natural gas with renewable.” RNG can also play a significant role in carbon offsets — major corporations and institutions can purchase renewable natural gas to offset those emissions that cannot be directly eliminated to help reach their sustainability goals.

The biggest hurdle is getting power-to-gas plants built. While both political officials and capital providers are excited about the technology, infrastructure that StormFisher is planning now in Ontario won’t come online for another five years because of the time it takes to permit, design and build.

“If we as a country want to hit certain targets by 2030, we really have to pick up the pace,” Moffatt says. What he really wants to see is early adopters helping to buy and build that infrastructure, as they have with other renewables. “The market has to be willing to pay for the environmental benefit,” he says. “And they’re not all entirely there yet.”

One early adopter is FortisBC, an electricity and natural gas distribution utility in British Columbia. Currently, Fortis receives about 20 percent of its RNG from StormFisher (about 150,000 gigajoules a year). But B.C.’s aggressive climate targets require that 15 percent of its energy needs — about 30 million gigajoules a year — be met by RNG by 2030. Power-to-gas could close that gap, but at the moment, given current regulations, FortisBC wouldn’t be permitted to buy such an alternative fuel outside the province.

Scott Gramm, Fortis’s manager of RNG, is nonetheless excited about the future possibility, both from a climate perspective and a financial one. “By making use of existing assets as much as possible, from an out-of-pocket perspective, we’re keeping the impact of these renewables coming online to a minimum,” Gramm says. He also thinks that StormFisher, of any company, is perfectly poised to make this technology a reality. “I’ve known Brandon now for over a decade,” Gramm says. “He’s always been very creative and innovative. And StormFisher is always at the leading edge in this space.”

StormFisher is one of 10 companies in Mission from MaRS, a special initiative that’s working to tackle the global climate crisis by accelerating the adoption of new solutions.

Creating impact: how the Mission from MaRS Climate Champions are scaling their solutions