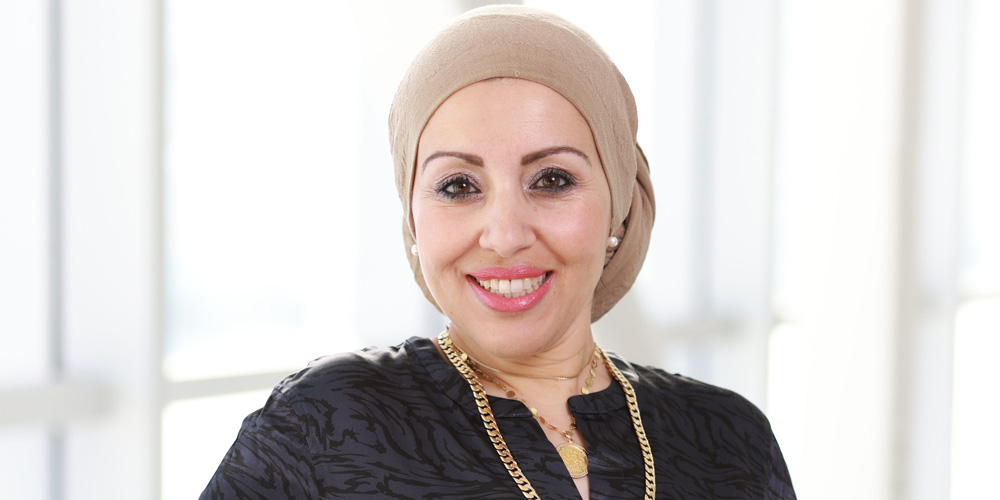 Ghada Nafie, winner of the new Mission from MaRS Climate Venture Diversity Award, has put diversity, equity and inclusion at the centre of her business.

Ghada Nafie remembers the exact moment she witnessed the breakthrough her team needed to get the cleantech company Litus off the ground. She was in a lab at the University of Calgary with a research associate, testing a few nanomaterials they’d developed to see if any of them could extract lithium from a brine.

The most common method is both time and resource-intensive. It requires pumping mineral-rich brine up from underground deposits, then waiting 12 to 18 months for the liquid to evaporate, before chemically processing it into a usable material. The process can be incredibly damaging to the environment as it pulls up huge amounts of groundwater, risking contamination, which can throw whole ecosystems out of balance. Nafie, co-founder and CEO of Litus, wanted to find a better way.

Nafie and her colleague were watching to see if one of the nanomaterials they’d developed could reduce the time and energy needed to extract lithium. The potential of this can’t be understated: the demand for lithium is estimated to grow 8.5 times between 2020 and 2030, fuelled largely by the proliferation of electric vehicles, and current methods of extraction cannot meet the demand.

After six minutes, Nafie remembers looking at her colleague while the realization of what they had achieved set in. “Oh my God, we have just done something that could be so groundbreaking that can really change the cleantech sector,” she recalls thinking.

Using this nanomaterial to extract lithium from brine will cut out many steps from the current process, including the months of evaporation required that tamper with existing ecosystems. Litus’s technology enables lithium extraction from sources where evaporation simply isn’t a possibility. It can extract lithium in a matter of hours, leaving the brine mostly unchanged. It also creates minimal waste, is far-less energy-intensive than the current process, and it costs less than half of what a typical process does in both operating and capital costs.

In the three years since that initial breakthrough, Litus has scaled from lab to bench to a mini-pilot project, and is now developing a field demonstration unit.

Not only has Nafie and her team at Litus been able to grow their company, they have done so by putting diversity, equity and inclusion (DEI) at the centre of the business. At the recent MaRS Climate Impact conference, Litus won the inaugural Mission from MaRS Climate Venture Diversity Award, a prize created in collaboration with HSBC Canada to recognize Canadian innovators making big strides to increase diversity in the cleantech sector. Diversity is essential to fuel the innovation needed to meet the challenges posed by the climate crisis. Report after report has confirmed that diverse teams are more successful than homogenous ones. But unfortunately, data shows diversity is lacking in the cleantech sector.

“Innovation knows no borders, it knows no language and it knows no gender,” says Nafie. “By forming a diverse team, you’re allowing for an enriching collaborative experience.”

Nafie wishes the person behind an innovation didn’t matter — that ideas could simply stand on their own. But as a woman who came up in engineering, she knows that’s simply not the case. As of last year, just over 20 percent of newly-licensed engineers were women. And in cleantech, the statistics are even more bleak. A 2019 survey by MaRS revealed that just one in 10 small and medium-sized cleantech companies were founded by a woman, with 19 percent having at least one woman founder. Only 0.9 percent of these companies were owned by Indigenous peoples and just 3.6 percent are majority-owned by someone from a racialized background — and none were owned by people with disabilities.

As a judge for the award, Gerardo Marquez, a consultant at social impact organization Reos Partners, was looking for far more than representation when assessing ventures. Often companies bring in new hires to change the face of the company, but that doesn’t change the culture of the company, he says. Marquez was looking for how leaders are making room for the people they are bringing in — how the company’s culture is changing as a result of its team. And that’s not always easy. “There’s a need to have difficult conversations, to feel uncomfortable,” says Marquez. “If you are not, then you are just continuing the standard policies that are going to give you substandard outcomes.”

There were two things that stood out about Litus for Marquez. The first was the managerial accountability to its DEI strategy. “When we’re talking about DEI, often the focus is on the individual employee and not on management,” says Marquez. In short, a DEI strategy alone says nothing about the commitment to implement it. The assessment of Litus’s DEI strategy is being determined by employee feedback. Tying a DEI strategy to accountability at the managerial level ensures it doesn’t become a secondary goal, or something simply nice to have but not part of the core business.

The other significant element Marquez noted was the recognition that the startup could address Truth and Reconciliation Commission Calls to Action through its work, something he says should be a priority for all organizations in Canada. Litus is working with a First Nations company on exploring opportunities for lithium extraction in southern Alberta, and has received investment from an Indigenous group in Ontario.

The field of applicants for the Mission from MaRS award was particularly strong. Two ventures were given honourable mentions. CERT Systems, which has created a method to split carbon dioxide and convert it to other chemical products like ethanol, was recognized for having the highest climate impact potential. Adaptis, which has created a platform to optimize decarbonization and circulatory planning in building and retrofit projects, was singled out for its particularly strong DEI strategy.

These cleantech entrepreneurs have the potential to be the leading employers of the future, says Andy Lam, manager of climate programs at MaRS. “We need to ensure they are supported to not only achieve our climate objectives but create an environment for an equitable and inclusive workforce.” The award was set up to help create those knock-on effects.

“HSBC is proud to support the Mission from Mars Climate Venture Diversity Award to highlight climate solutions and diversity representation in the cleantech sector,” stated Kim Hallwood, the head of sustainability at HSBC Bank Canada. “Congrats to Litus, the award winner, we look forward to following your journey and seeing the impact you make.”

Nafie is no stranger to accolades — winning an Alberta Science and Technology Foundation Clean Energy Award and The Firehood’s Women in Tech $100k investment earlier this year. But, this award is particularly meaningful, she says, as it recognizes that for someone like her, the path isn’t always so straightforward. “It’s like someone out there saying, ‘we understand what you’re going through — cleantech doesn’t have a lot of support in this area and we acknowledge the difficulties you face,’” she says. “And that, by itself, is huge — it’s a push forward.”

7 ventures on a mission to green our cities